Laura Wolfe, friend and fellow author, is launching her fabulous book and I canNOT wait to get my hands on it! Here is Laura's summary and totally cool cover. Mystery? Ghosts? Girl detective? This book has my Nancy-Drew-loving' heart a flutter! 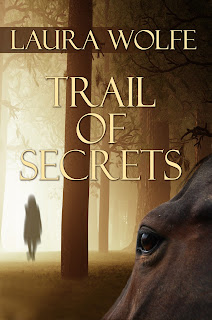 Trail of Secrets, by Laura Wolfe
Fire and Ice YA (Coming August/September 2015)

Spending three weeks of her summer at the elite Foxwoode Riding Academy in northern Michigan should have been one of the happiest times of sixteen year-old Brynlei’s life. But from the moment Brynlei arrives at Foxwoode, she can’t shake the feeling she’s being watched. Then she hears the story of a girl who vanished on a trail ride four years earlier. While the other girls laugh over the story of the dead girl who haunts Foxwoode, Brynlei senses that the girl—or her ghost—may be lurking in the shadows.

Brynlei’s quest to reveal the truth interferes with her plan to keep her head down and win Foxwoode’s coveted “Top Rider” award. To make things worse, someone discovers Brynlei’s search for answers and will go to any length to stop her. As Brynlei begins to unravel the facts surrounding the missing girl’s disappearance, she is faced with an impossible choice. Will she protect a valuable secret? Or save a life?
Age level:  13-18


www.AuthorLauraWolfe.com
Posted by Catherine Bailey at 5:00 AM